June 21, 2015
Sunday symposium took of at 8:30. Unfortunately i had to skip the first two session due to some work That had to be done first. The first session I really got to attend was Brian Fry's session on Oracles Developer Cloud Service.

JDeveloper, Eclipse or Netbeans was the way you would work with Oracle Developer Cloud. Now there is a new feature (not publicly available) that is a browser based IDE. It is a full development environment. It is a very flexible, responsive and quick UI. it has an integrated out of the box GIT repository. It can be used for both JavaScript, and Java EE and java SE. Oracle uses the DevCS to build the DevCS with over 145 developers using 27 GIT repositories. So oracle now is drinking their own champagne, which sounds much better then eating their own dog food by the way. 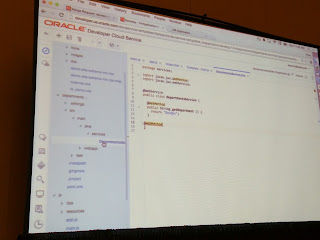 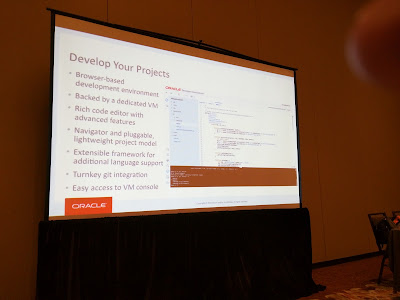 The demo was nice and showed the power of the Javascript editor and the integrated support with GIT. also the Java editor looked very promising. We will have to sit and wait for this to be publicly available.

After lunch Lynn Munsinger, talked about Mobile Cloud Service aka MCS. She explained some of the concepts of mobile development and Mobile Backend as A Service. (MBaaS). Somewhere during this session there was a small hint about MCS being released maybe tomorrow during a live webcast. Next Lynn showed Oracle Mobile Cloud Service in a demo. finally as a bonus, there was a demo of MAX, aka Mobile App Accelerator. MAX is a part of Oracle MCS where a business user can actually create real mobile apps without coding. I have seen this before, but now it is going really close to being production. It might even be part of the first MCS release, that might be release tomorrow.

The final session of the day was really worthwhile. In this session Brian Fry showed Oracle Application Builder Cloud (it is as easy as ABC) for the very first time publicly. 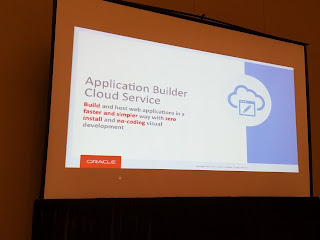 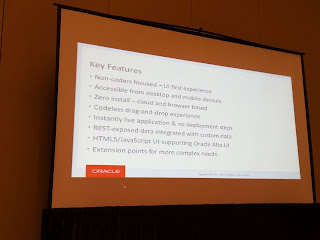 ABCS is a tool for the Citizen Developer. It is targeting non technical business users to rapidly build web and mobile apps. The key features of ABCS are the following (amongst others): 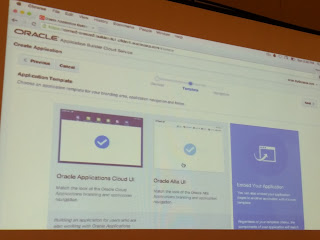 I certainly hope there is more to come soon.
For you the get a glimpse of what ABCS can do, you can look at the two video's I created.

Here is the first one:

Here is the second one: